Technology - Love it, loathe it, it has become our constant companion and has become a part of our daily lives . We bring our smart devices everywhere we go and we’ve unintentionally made it a part of us. It’s safe to say that for most of us, technology has become our best friend.

Ron’s Gone Wrong is Disney’s newly released animated film that tackles the issue of friendship in our modern society as well as the dangers of technology and social media. The movie stars Barney Pudowski, an awkward high schooler who happens to be the only person in the school without a B*bot (a futuristic, egg-shaped robot that has been personalised to the user’s likes and dislikes). He desperately yearns for one and eventually receives one from his family. However, something about his new B*bot is not right -  he spends the entirety of the film teaching the B*bot, Ron, the “tricks” on being the ideal best friend for him.

To be completely honest, when I heard that this movie was based around friendship, I was not thrilled. After all, we’ve seen nearly countless movies with the same premise - boy/girl is lonely, or does not fit in, boy/girl meets interesting person, animal and/or thing that will help them fit in, something goes wrong, and the power of friendship saves the day!

However, Ron’s Goes Wrong manages to put a fresh spin to this trope by tackling other real-world issues throughout the movie, especially ones that have an increased relevance within society today.

REALITY OF FITTING IN 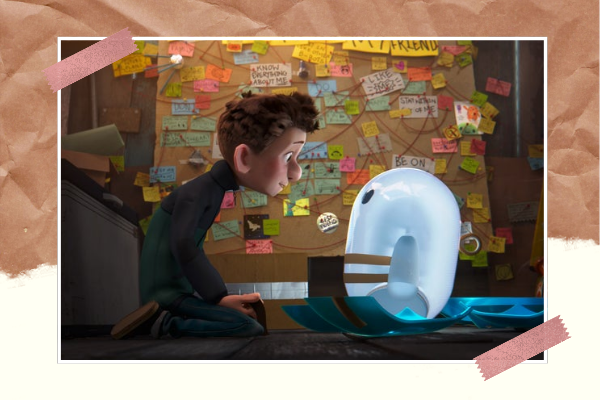 Barney teaching Ron how to be the ideal best friend for him. (PHOTO: Syabil Rizqin)

In the film, the cute B*bot Ron is, in a word, defective. Obtained for Barney by his doubtful father so that he can “fit in” with everybody else in school, Barney has to go through sometimes extreme measures to ensure that Ron can help him fit in with the rest. In his quest, he realises that some things are more important than having the perfect technology to help you conform.

It is a timely and relevant message, if cliched. Barney’s father utters an ironic line about not wanting his son to be addicted to technology, before getting his attention glued back to his phone. The film reminds us of a time where we all needed that one extra accessory that everybody had - the one that might not have been completely necessary for our use, but was very much needed for us to fit in.

In this modern day and age, these little extra accessories are no longer pretty colour pencils and cool pens, but rather the latest and greatest tech products and gadgets that everybody else seems to have The film reflects the pressure that youth in particular often feel to fall in line with the rest and fit in - and how even getting what we think we want might not necessarily make us any happier.

This is not the only message to resound in the film. Ron’s Gone Wrong also highlights how the personas that one puts up online are often not a true reflection of who we are, and how this can be damaging to the friendships that we do have.

This is truly an eye-opening message as it showcases how ridiculous some people may go in hopes to earn an extra follower or like on a post. They showcase the various “changes” a character makes and how in reality, they are not actually “happy” doing so. The social pressure to be “famous” or “well-liked” is something many youths encounter in their lives and should really not be the case as we all have our own unique traits that make us special.

Making an animated film during the pandemic

The other outstanding aspect of the film is the impressive feat that the production team went through to bring it life. Ron’s Gone Wrong is a film that was put together in the height of the Covid-19 pandemic, when operations around the world came to a sudden halt. Nevertheless, the production team from the British animation studio, Locksmith Animation, was able to pull through and push out, in my opinion, one of the best animated films of the year. An impressive feat, considering that this is also the animation studio’s debut feature film.

Julie Lockhart, President of Locksmith Animation shared during a press conference, that the toughest part of the film’s production journey was the need to close down production and have everyone work remotely from their own homes.

“As important as it was to figure out the work protocols that would keep our production schedule flowing, an equally daunting challenge was keeping spirits high and maintaining a sense of connectivity and comradeship amongst our team, which of course is a lot of what our movie is about,” said Lockhart.

Fortunately for the company, the mandated lockdown in London only came about in spring 2020, 18 months after the team had already started familiarising themselves with one another.

Throughout the lockdown, they have managed to keep the motivation of the crew going in their weekly status meetings by having “themed meetings”.

Every Friday, members of the team are required to dress up according to the theme of the week. The various themes they have had include: mimic your favorite BBC Broadcaster; insert yourself into your favorite album cover (Sergeant Pepper, The Beach Boys’ Pet Sounds and Simon & Garfunkel’s Sounds of Silence were particular favorites), LGBTQ Pride Week; fashions from a favorite decade, etc.

Director of the film, Jean-Philippe Vine, felt that this “initiative” was much needed for the team.

“It kept us sane, to be honest!” said Vine. “Making any animated movie is a marathon and is very punishing on a crew so finding ways to inject some fun into this particularly daunting set of circumstances made all the difference.”

THE DIVERSITY IN THE FILM 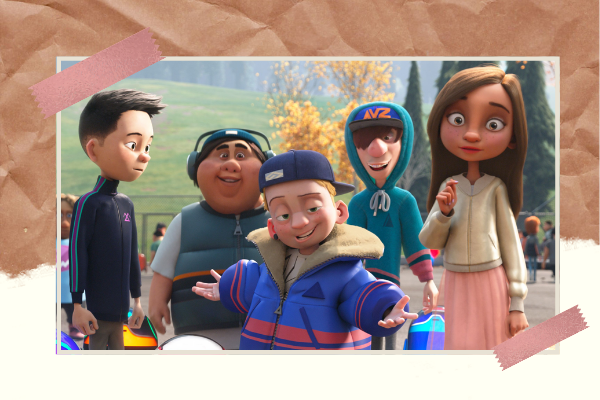 One of the things that stood out most to me in this movie was the range of diversity seen in almost every scene. In 2021, many of us have pushed for greater representation in the media and yet some companies have failed to deliver in that aspect, pushing out films and television series where diversity is still sadly lacking. Ron’s Gone Wrong, however, does not fall in this category. In this film, we got to see characters of different races, cultures, religions and skin tones.

Barney Pudowski comes from a Bulgarian background with a very traditional grandmother living with him. The film showcases various aspects of the Bulgarian culture such as their foods and traditions that I was unaware of prior to watching the film! The giant tech company featured in the film, Bubble, showcased staff from various backgrounds.

As a child, I had always wished to see more positive representation of the Asian community or the Muslim community and this was what the show had delivered. It was commendable that the team had thought to include hijabis, individuals of different racial backgrounds and even gave us plus size representation.

However, it was unfortunate that these characters were often reduced to “extras” in the film - it would have been more encouraging to see more diverse characters given the spotlight in animated shows. Overall, this is still a positive step towards greater representation in the media, and it does a good job of showcasing how even animated films can be inclusive.

This film is definitely one to watch. From it’s touching storyline to the quality of the production, it was definitely an enjoyable movie from start to end. The message of the film and problems highlighted is definitely something everyone could benefit from, regardless of age. What was highlighted in the film are real issues society faces and watching it has truly been an eye-opening experience.

So, if you are someone who enjoys a wholesome, innocent and touching animated film with a strong message, this film is definitely for you.

Catch Ron’s gone wrong in theatres near you from October 21.